​On our fourth day in Malta, we headed to Debbie’s Cafe again for breakfast. I opted for the delicious, fluffy pancakes with syrup and banana, whilst my partner had a bacon sandwich, made with fresh ciabatta bread.

Washed down with freshly squeezed orange juice and a pot of tea.

Wildlife Park Malta is a bit off the beaten track, but it’s a lovely little place, where you can see the love the family have for the animals. This was our second visit, as we went to the Wildlife Park last year too.

Once we arrived, we paid and recieved the obligatory guided tour around the Wildlife Park. Once it’s over, you’re free to roam around and spend more time looking at all the animals. A free drink in the on-site restaurant is also included in the entrance price.

I got to bottle feed the baby deer Bambi, who was not only adorable and as cute as can be, but very gentle.

I could have took him home with me!

It was then that me and my partner did something a little bit crazy. We fed a tiger!

Last year at the Wildlife Park, twin tiger cubs Lilly and Lola were born and I was fortunate enough to hold them both and get photos. Here’s some photos from last year.

This time I went in with Lilly, whose now all grown up and just over a year old. My partner also did the tiger experience with me.

She licked cream off our hands. 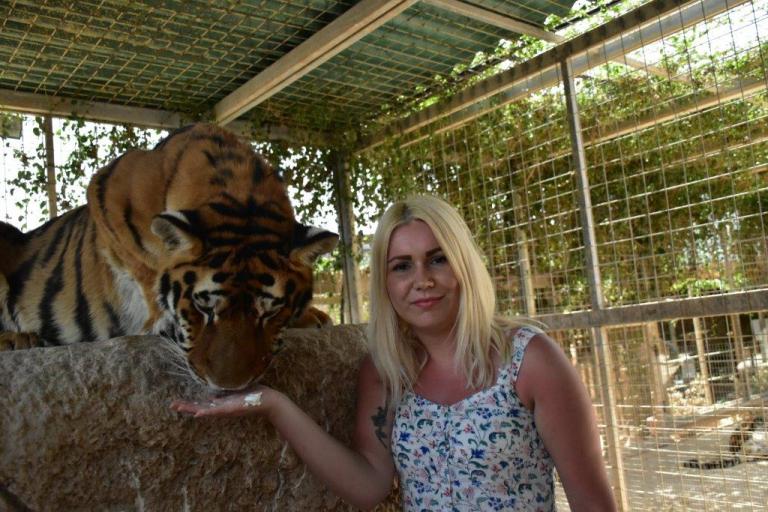 And I can say it was quite the experience. Unlike a lot of places that offer experiences with tigers, Wildlife Park Malta does not drug or harm the animals in any way, which is important.

After an exhilarating experience, we were dropped back to Mdina by Chris, one of the owners of Wildlife Park Malta.

Mdina is a beautiful walled city, known as the Silent City.

As we’ve been twice before, we only walked briefly through the narrow streets. We picked up an ice cream from Fior Di Latte, a small shop towards the end of the walled city.

We bought ice creams from here last year and they’re easily as good as real Italian Gelato. I got a triple cone of Stracciatella, Cookies and Mint Chocolate Chip ice cream. Delicious.

We jumped in another taxi, back to our hotel in Mellieha, where we relaxed before going for dinner.

For dinner, we headed to a restaurant called Bouquet Garni in Mellieha and the owners of the restaurant are Debbie’s parents and brothers. Debbie has been mentioned a lot in my Malta posts, as she owns and works in Debbie’s Cafe!

Bouquet Garni is a small, elegant restaurant that prides itself on fresh food. It’s the number one rated restaurant in all of Malta and it’s an accolade it deserves. The owners bring around fresh fish to show what’s on offer that day, as well as bringing over freshly baked, warm bread.

To start, I had stuffed mushrooms topped with cheese and breadcrumbs, whilst my partner had barbequed octopus.

Bouquet Garni is a little gem, that offers great service and great food.

After a busy day, we headed back to our hotel for some tasty cocktails before bed. I opted for a Papaya Colada, which was sweet yet refreshing and my partner had an orange based cocktail.

And then it was time to sleep, ready for our fifth and final day.

On our fifth day, we put our suitcases into storage, waved goodbye to our hotel room and had one final breakfast at Debbie’s Cafe.

We decided to start our days adventures in Mellieha, visiting the Mellieha Air Raid Shelters. The Air Raid shelters were dug to shelter the towns population from bombs during WW2. Entry is only €2.40 per person and the large, underground shelters are fascinating.

Each families room had just 0.6 square metres of space. Some rooms have been set up to show how people lived in the shelters and the photo below shows a maternity ward.

The shelters give an interesting insight into life during WW2 and is definitely worth a visit.

After the shelters, we browsed Mellieha’s shops before taking a taxi to Malta’s Aquarium.

The Malta National Aquarium only opened a few years ago and is a sleek, stylish and modern building.

The restaurant inside the Aquarium.

The Aquarium was a nice way to spend an hour or so on our last day. It is fairly small compared to other Aquariums I’ve been to and it does have a limited variety of sea creatures, but I still enjoyed our visit there.

As our last day was drawing to a close, we headed back to Mellieha and had a final feast at Debbie’s Cafe.

We shared three delicious cupcakes and an amazing Oreo Milkshake.

After getting our sugar fix at Debbie’s, we walked back to our hotel to pick up our cases. We climbed into the final taxi of our holiday and as we headed to the airport, it didn’t feel like a proper goodbye. Looking out the windows, taking in the views, we discussed when we’d next return.

Here’s the links to read about days One, Two and Three.